INN University researchers on the war in Ukraine

There’s a war in Europe. Several of INN University's researchers contribute in the media to help us understand what is happening in Ukraine and the world right now. 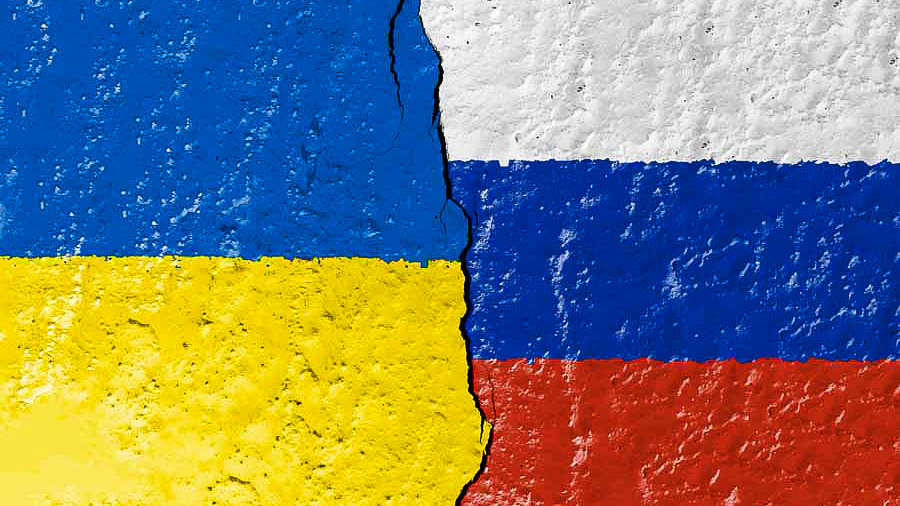 INN University researchers have been interviewed for a number of Norwegian language sources during the past few weeks. Below is a summary in English of some of their input, with links to the Norwegian sources.

“Schools must get ready to receive refugee children”

Many of the refugees who have fled across the border into Ukraine's neighbouring countries will travel onward. Some of them to Norway. We do not know how many, but preparations are underway, also among teachers and in schools.

Professor of education Thor André Skrefsrud has researched diversity in the classroom and how schools can best meet newly arrived children who do not know Norwegian.

“For teachers, it is about being able to meet the different needs that different groups of students have. Receiving Eastern European students into the class will be quite different from receiving newcomers from Syria or Somalia. Most would want all-encompassing schooling. They are probably used to a stricter school system than the Norwegian one and will have expectations of other and more communication-oriented ways of conducting teaching than is usual in Norway.”

The diversity competence in Norwegian schools can vary and depend on individual teachers.

“The students must not feel like they are coming to the Norwegian school system as blank slates. They know things and bring with them something valuable in terms of knowledge and competence. It is about drawing lines between the students’ different life worlds and comparing what the students know and can from before, with the Norwegian school life, and being able to create meaningful interactions for the students both academically and socially,” says Skrefsrud.

In need of rapid training

Another person who is concerned about how we will receive the refugees from the war in Ukraine is Lars Lien.

He is a psychiatrist and professor at INN University where he heads a trauma research group that has worked extensively with people who have been exposed to traumatic events and who have experienced crises.

The professor believes, among other things, that it is very important to initiate rapid training of those who will meet the Ukrainian refugees in Norway – and it must happen now. “It is important to be prepared when people who have experienced war arrive here,” Lien says.

Lien has written a textbook on the mental health of refugees and is also the head of the Norwegian Psychiatric Association.

Gjermund Forfang Rongved is an associate professor of economic history and international studies at INN University.

In a column in Minerva, Rongved asks the question of whether the economic sanctions will be the nail in the coffin for Putin's Russian empire.

If Russia finally wins the war with a complete victory over Ukraine, Putin will have probably created a nightmare for himself, writes the associate professor.

He further writes and answers his own question: “Putin has created a situation where he – even if he apparently should win militarily or through negotiations – cannot achieve his goals. Both a full military victory and a negotiated solution point to a deep weakening of the vast Russian empire and the possible fall of Putin.”

Marianne Riddervold is a professor of political science at INN University and has done a considerable amount of research on the relationship between the great powers, with a special focus on Europe and the EU’s foreign and defence policy.

She says Putin’s invasion of Ukraine will lead to lasting changes in conditions in Europe.

“This changes the security policy landscape. Now one must relate to Russia as an aggressive and unpredictable actor who speaks a language of power politics that we know from the 20th century. I think we will see big changes in the future,” she said in NRK TV’s live broadcast on 25 February.

The EU will have a central role in the future as the closest neighbour to Ukraine, she believes.

She has also stated that Putin really wants a regime change. She is interviewed about this in an article on nrk.no.

In another interview with the morning news on NRK on March 3, she talks about the possibility that more countries may become NATO members.

Talk to the kids

The war that is now raging close to us can seem especially frightening to children.

Associate Professor Karin Boson from the Department of Psychology has worked extensively with crises and how adults can help children deal with them.

“Children need to know that they can talk to the adults, but they do not need to know all the details. It is important that we shield children and youth – they do not have to take part in the brutal adult world we are witnessing now. It is perfectly fine to turn off the news and take a break,” says Boson in an interview with NRK TV.

In an interview on TV2.no, Boson advises that parents should relate to the facts and adapt the wording based on the child's maturity level.

Boson also asks us to take responsibility for those we meet who need support.

“When we are afraid, we have a greater need for someone to get in touch and show care,” she writes in a column in GD and in a TV interview with NRK.

She has clear advice for those of us who know someone who has relatives in Ukraine: show care.

“It can be as simple as just contacting someone and saying ‘I do not know if you want to talk to me, but I know that you have relatives in Ukraine, and I just want to say that I care’,” she tells nrk.no.

Developments in Ukraine and international tension mean that scenarios that were rather remote until recently, are no longer so.

Bjørn Tallak Bakken, researcher of social security and emergency preparedness at INN University, believes that Norwegians are far too unprepared for crises. We knew very well that we could experience a pandemic. Still, we were ill-prepared when it arrived.

“What a short time ago were remote scenarios, are no longer that. We, and many with us, were caught unready with the pandemic. Now, again, we are left in a situation where there is a need to mobilize emergency preparedness in the civilian population, says Bjørn Tallak Bakken in a recent article on inn.no.

The researcher believes that the authorities must step in and remind the civilian population how each of us can be prepared. He mentions well-known “prepping measures” such as keeping a reserve water supply, building up a stock of canned food, fuel, and necessary medications.

Tallak Bakken also comments in an article on nrk.no about shelters in Norway. He says, among other things, that parking levels located under apartment buildings can be used.

Professor of petroleum economics, Ole Gunnar Austvik, believes sanctions and mistrust will be harmful to both Russia and the West, but worse for Russia. This is because the Russian economy is highly dependent on oil and gas revenues.

Russia will suffer economically, and EU countries will try to become less dependent on Russian oil and gas.

He says there is uncertainty around how the war could affect the flow of oil and gas to Europe.

“If everything stops, it will be quite dramatic. But there is a big gap between the extremes so far,” he says to NRK.

“Sanctions are almost the only thing we can utilize, because we do not want to enter into an armed conflict directly,” he says in this article in VG.

Cyber-attacks in Ukraine – expected and anticlimactic

“The cyber-attacks we see in Ukraine now are part of the political conflict, but not part of the military operation.”

These are the words of Professor of Cyber ​​Security at Inland School of Business and Social Sciences in Rena, Mass Soldal Lund, in an article in Dagens Næringsliv.

Soldal Lund, who is on leave from the Norwegian Defense College, has worked as a researcher with cyber security in a military context, and now focuses on so-called hybrid warfare.

He thinks we can see more and more cyber-attacks from the Russian side, but it is not a given that it happens, as some seem to believe.

What we have witnessed so far in terms of cyber-attacks on Ukrainian targets have been small attacks and not very successful ones, Soldal Lund believes.

Afraid for her parents

Ukrainians in Norway find it tough to follow the war in their home country from a distance.

One of them is INN University’s Yuliya Chernykh. She is a lawyer and associate professor at the Department of Law, Philosophy, and International Studies. She researches and teaches international dispute resolution and her fields of study include Ukrainian law, international law, and international private law.

She researches very relevant topics for what is happening in Ukraine now, but these days it's mostly about Yuliya trying to help her loved ones who are still in Ukraine.

In this feature on NRK Dagsrevyen, she talked about the desperate situation in which her parents are in Kyiv and about not being able to help them.

“The Ukraine crisis is not a religious conflict. But no matter how it develops, Putin and the church will still have overlapping interests,” writes Vebjørn Horsfjord in a column in Aftenposten. Horsfjord is a professor of religion, philosophy and ethics and works at the Department of Social and Educational Sciences.

The INN University professor writes in the article that beneath the surface of the Ukraine conflict lurks a conflict between two of the world's foremost church leaders, the patriarchs of Moscow and Constantinople (Istanbul). Disagreement over ecclesiastical sovereignty over Ukraine provides the powerful Russian Orthodox Church and Russian President Vladimir Putin with converging interests, writes Horsfjord.

“We see that the relationship between President Putin and the church has become closer in the last ten years. Putin has risen to the church's worldview, which holds that there's a battle between Russian civilization and a decadent West that is disintegrating,” says Vebjørn Horsfjord in a report in Aftenposten on 13 March.

Horsfjord has also been interviewed in Vårt Land in a report titled Religion researcher: Traditional values have taken the place of the gospel in Russia (subscription required).

On 9 March, he was a guest on NRK P2's Ekko and talked about these topics. You can hear the whole interview with him here.

Patriotic press during the Crimean conflict

After Russia's invasion of Crimea in 2014, Øivind Kalnes studied the Norwegian media's coverage of the conflict.

Kalnes is an associate professor of International Studies at INN University.

In the article “Cultures of anarchy: Images of Russia in the narrative of Norwegian mainstream news media during the Ukraine crisis 2014”, Kalnes writes together with Nina M. Bjørge from NTNU about three major Norwegian newspapers' coverage.

“The Norwegian media's narrative was relatively consistent in presenting Russia’s choice of a path that leads away from being a rival of Norway and the West, to becoming their enemy.”

The analysis shows that the press largely followed “patriotic norms” and avoided criticism of the government.

Does not affect the desire to travel

The fact that there is now full-fledged war in a country in continental Europe makes an impression on all of us.

Tourism researcher Veronica Blumenthal does not think what is happening now will affect our travel patterns.

Experiences from other crises indicate that a possible negative reaction in the market will be of short duration:

“We may see that travel activity to countries that are geographically close to Ukraine will slow down somewhat, at least until the situation is more settled. In general, however, I do not think that the desire to travel will be reduced by what happens,” said researcher Veronica Isabel Blumenthal of INN University to flysmart24 during the first week of the war.