Earlier this month, INN University received approval for two new doctoral degree programmes from the board of NOKUT. Those who have worked towards achieving this were delighted at the news. 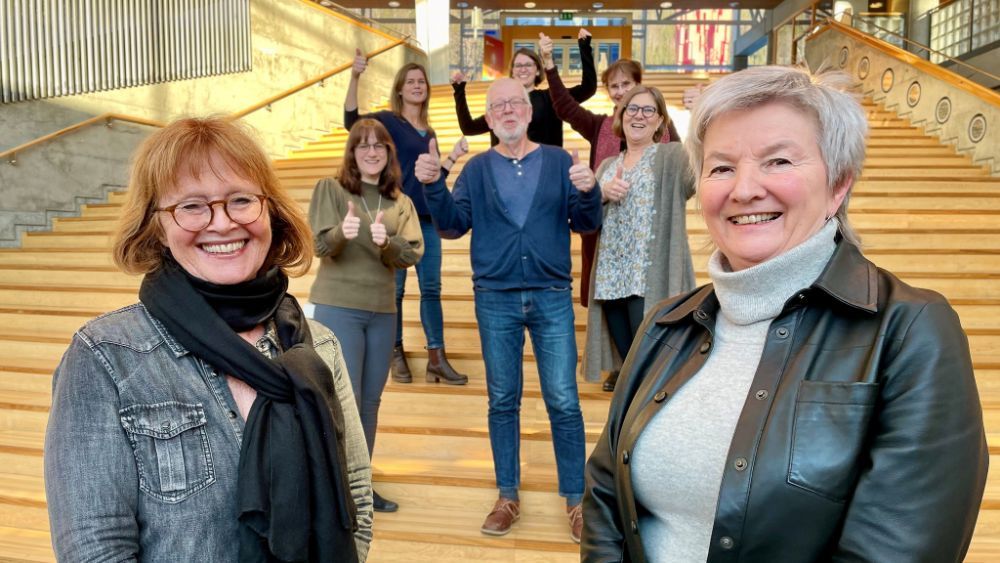 HAPPY BUNCH: Karin Julsrud (left) and Ingrid Guldvik in front of some of those who have helped realise the two new PhD programmes at INN University.

The two new PhD programmes have been named “Health and Welfare” and “Artistic Research in Film And Related Audiovisual Art Forms”.

They will be affiliated with the Faculty of Social and Health Sciences and The Norwegian Film School (NFS).

“Immense joy! This is something we have worked to achieve for almost three years, and we look forward to getting started with the programme in earnest,” says Dean of The Norwegian Film School Karin Julsrud.

“Now we are simply happy to have received such positive feedback from the expert committee at NOKUT. We have succeeded in something many of us have worked on for a long time. It feels good,” says outgoing Dean of the Faculty of Social and Health Sciences Ingrid Guldvik.

Before the board meeting of the National Board for Quality in Education (NOKUT) in early February, INN University had four doctoral degree programmes.

Following the positive decision by the board, the institution can now offer five PhD study programmes that lead to the highest formal education you can get in Norway.

The programme “Health and Welfare” will replace the current PhD programme “Child and Youth Competence Development”, while the PhD programme at the film school is brand new.

“This is the first time NOKUT has processed an application for such a programme, so it is exciting and really historical, and also an important recognition of the film school's academic environment,” says Karin Julsrud.

“What does this mean for you?”

“This will facilitate new and exciting activity for us. From both a national and international perspective, it is important that we in the film field can offer education and artistic research on par with other artistic fields in education,” says Julsrud.

The Film School’s PhD programme has been granted a temporary exemption from the quantity requirement for full-scale programmes until 2024.

The importance of today's decision is also confirmed by the Faculty of Social and Health Sciences.

“Now we get a PhD programme that covers all subject areas at the faculty, both in Elverum and in Lillehammer. The research groups get a professional boost, we get research fellows in several subject areas, our researchers get to be supervisors for research fellows, and we can accredit bachelor's and master's programmes at our own faculty,” says Ingrid Guldvik.

It is not only at the Film School and at the Faculty of Social and Health Sciences that the joy is great after the decision by the NOKUT board.

“This is a big day both for the institution and not least for the two faculties,” says INN University Rector Peer Jacob Svenkerud.

He adds: “This is a confirmation of the academic quality we have in these faculties, and in my opinion a great recognition for INN University in general, and for the academic environments in particular.

Not least, the rector believes that the decision from the NOKUT board can have an impact on the application for university accreditation, which will be sent during this year – to NOKUT.

“Receiving this current accreditation is of course important for the process we are in now – to be awarded university status,” says Peer Jacob Svenkerud.

As mentioned, the application process has been in the making for several years and a considerable amount of work has been put in by a great many during this period.

The dean of the Film School wishes to highlight one person in particular within this work.

“Without the newly appointed head of PhD programme from the autumn of 2020, Trond Lossius, I don’t think we would have reached our goal!”

Julsrud also highlights the collaboration with other departments at the institution, which has led to the Film School making history with its own doctoral programme now.

“We have had good support from the research and study department, the library and the rectorate, and are pleased that artistic research is now a clearer part of the INN University's research strategy,” she says.

The PhD programme in Health and Welfare will collaborate with, among others, the municipalities in Innlandet County, Innlandet Hospital Trust, NGOs, and others when they launch. And there will be extensive collaboration within INN University.

“Our challenge has been to gather researchers from health, social, public health and sports sciences under a common interdisciplinary superstructure that the PhD programme will become. We now feel that the academic environments are behind the programme and are very ready for its start-up,” says Ingrid Guldvik.

Will be put in motion shortly

Those who are associated with the current doctoral programme Child and youth competence development will of course be able to finish their work there, but in only a few weeks the new programme "Health and Welfare" will launch.

“We are ready to start with the first course in the philosophy of science and methodology after Easter. And we have many PhD students who are in the starting stage for their PhD work. There is a lot of energy and commitment around the start of both compulsory and optional courses in the academic year 2022/23,” says Guldvik.

At the Film School, too, they are more than ready to get started.

“We receive enquiries almost daily, so there is great interest within the film field for the programme that we are now establishing. This will be exciting!”, concludes Karin Julsrud.

The decision by NOKUT is now sent to the Ministry of Education and Research, which shall make the final decision before it is considered by INN University’s Board.